Do you know what that glass sign. In the old days of the British movie of town scene, shop logo shining glitter and gold to show window. It Glass signs that are used therein. There may be possible to see occasionally in Japan. However, those seen in Japan are mostly made of sealing.The real thing is affixed is gold leaf and silver leaf, and special treatment is applied, it is made by the hands of the whole process craftsman rather than a machine. In Europe and the United States, has a history of 200 years as a traditional craft of glass decorative field, demand still is that many. Especially famous in the place, Louis • Vuitton, Ralph Lauren, Palazzo • Hotel (Las Vegas), likely ACE Hotel, Disneyland, etc. of the United States is using as an important decoration such as the main sign. For all of stroke, such as etching or gold leaf to be implemented from the back side of the glass, the surface is beauty due to the reflection of the light there is no irregularity there is a thing exceptional. However, itself be made up it harder, not intended to be in overnight. Currently, there are only people that can be all the way of its construction in Japan. He is Mr. Hiroki Kataoka but that is active in Ujidawara. 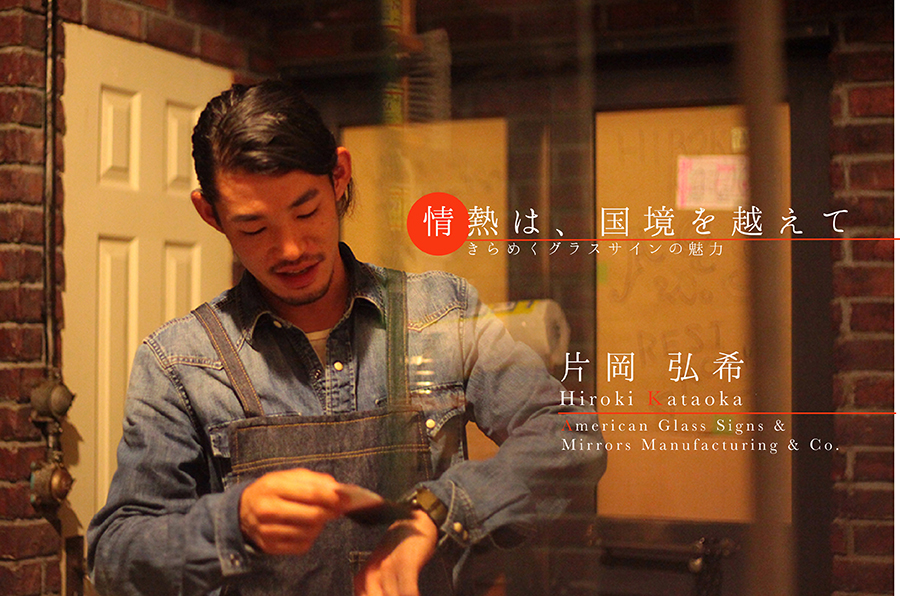 Had visited the production site of Kataoka-san, in early September, it was the heavy rain of the day. That day under the influence of the typhoon, the more will come water immediately until the bottom of the road along the river, Uji River had increased the water level. His production site, located in the Ujitawara went up such a Uji River along the road. Because I lost a little, to a phone call to Kataoka. Seems to have come to the immediate vicinity, in the rain, Kataoka-san came to meet without stabbed umbrella.

“Thank you have had purposely come. You’ve done very in the rain today. Nde right there that, please turn to the car here.”

While wet in the rain, figure who greeted joyfully was like a boy.
Production site, on the wall of red brick, glass glass sign of his early works are embedded, a large table for the production, there was a bar counter. Interior decoration, that all was his handmade. 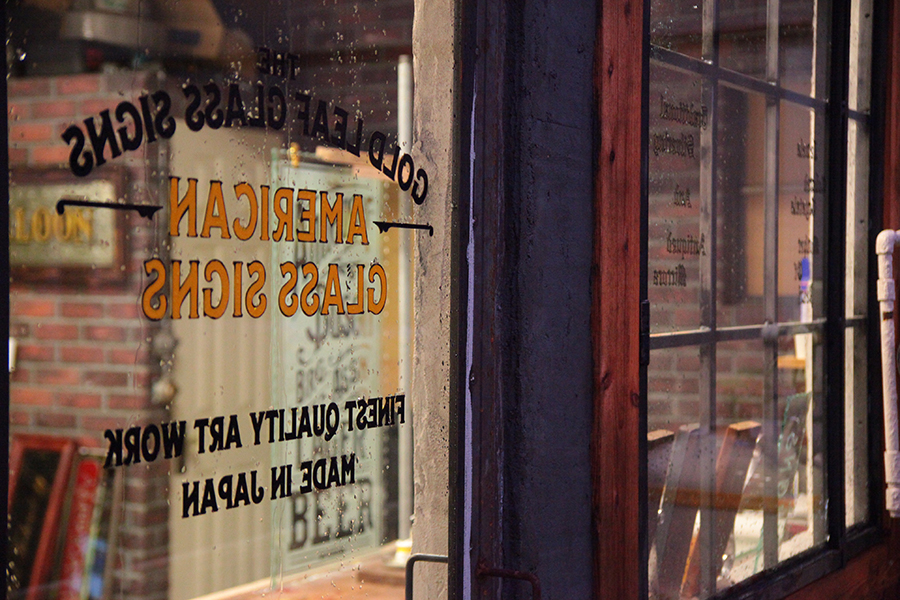 “This plant (factory) is still But I finished it before that I”
show a smile. Aroma of intermingled in complex musk is in the factory. In those of the same incense manufacturers sometimes I have been using your No.8, and speak when.

“Oh, Is it true, but it is also good there. By the way, this is also’m good smell,”
and, me and people bag gift. He is, here is also listening to what, will be answered happily. And have an interview, it becomes fun to here.

If you search for “glass sign” on the net, only come out with a Japanese Kataoka. In traditional craft overseas, from the difficulty of construction, also it does not have people who are also taught people to teach in Japan.

Glass sign begins with etching a sheet of glass (that produce patterns scraping the surface of the glass). And gold leaf-covered, (production of mirror) Ginbiki, are subjected to a variety of paint.The stroke, are all done by hand. It just works of art that goes beyond the realm of the signboard. Kataoka is listed on the theme of “the finest of making things”, using the same finest materials with the Western craftsmen, make up a piece of glass sign without any compromise.Order, and Tokyo that stretched wide antenna, local Kyoto, Osaka might seem at first glance at least the center, but still that’s three months waiting until delivery. 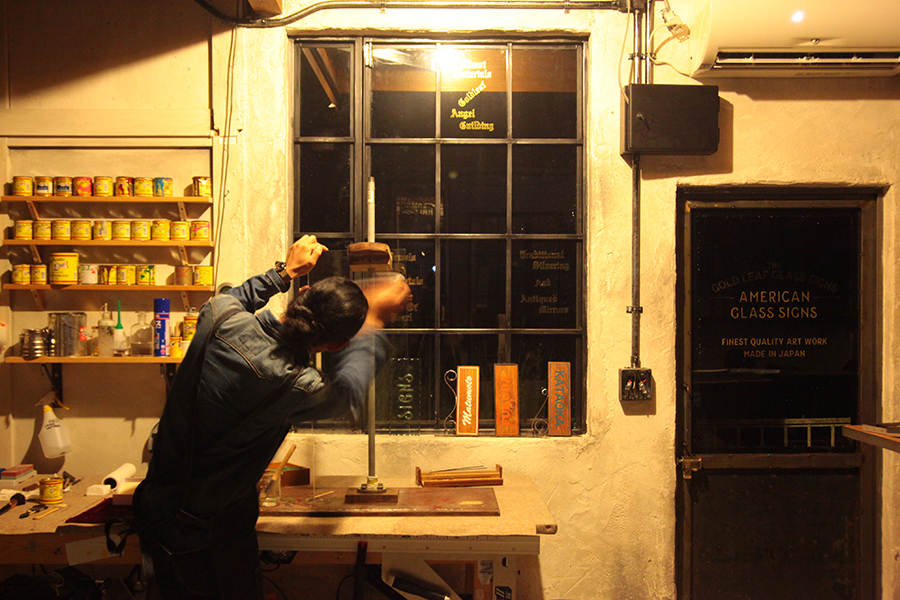 “Now, I have a work in the personal as American glass Signs. And I’m going to continue to activities cause a full-fledged company from April of 2017 next year.”

Entrepreneurship plan also has been considered, seems to have decided also partners who already working together. Calm Kataoka you have carefully prepared to go spread the glass sign, but because did not have a calm when I met in this technology.

10 years, Kataoka, who had been the work of sign production design and handwritten recipe is, I met with the glass sign is three years ago likely. Kataoka that was interested in the United States and the United Kingdom of culture, in the book that I picked up for the study that there was a shocking design.

“I’m of this. This design when first seen, if Ninen you doing now Kore, is on in. Until then I will to sign paint I was confident, not even know how I only is this finish.” 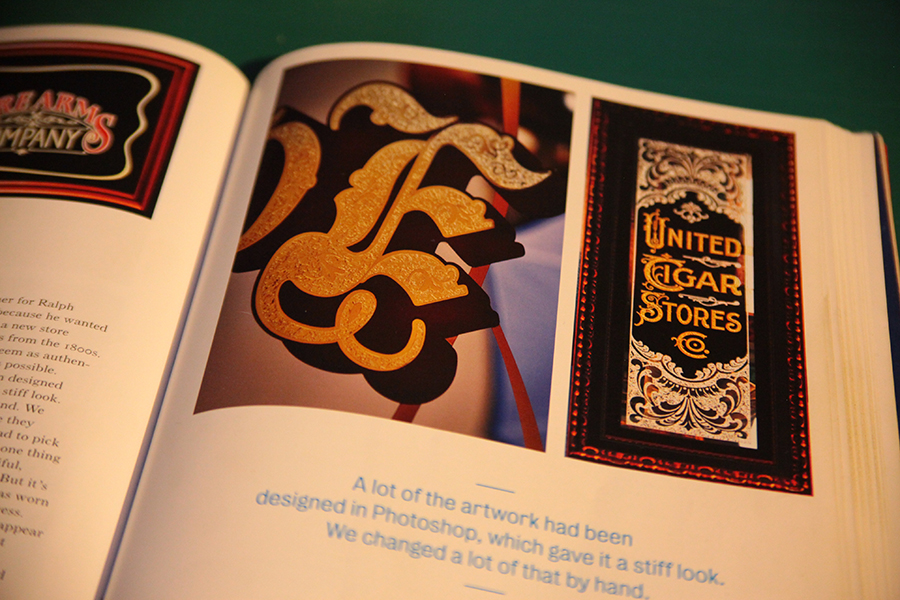 “The moment I saw this, I want to see this person. I want to know the technology, I’m now on. In, I I was immediately sent e-mail. Since the English do not know, write a sentence in Japanese, it ask them to translate to a friend. ”

“At that time passionate feelings Kakinagu’ and of. I will be your disciple, saying in. I want you to because also no money to live-in. I need your help because the meal also make.Wrote that like a great impudent I’m sending (laughs) ”

“And then, I’m came reply. I was surprised. I’m thought either ignored, perhaps I guess this guy seriously Kuruzo, that I mean was transmitted (laughs) for sending me a reply.”

“In, it is said I calm down anyway (laughs) That’s right.” 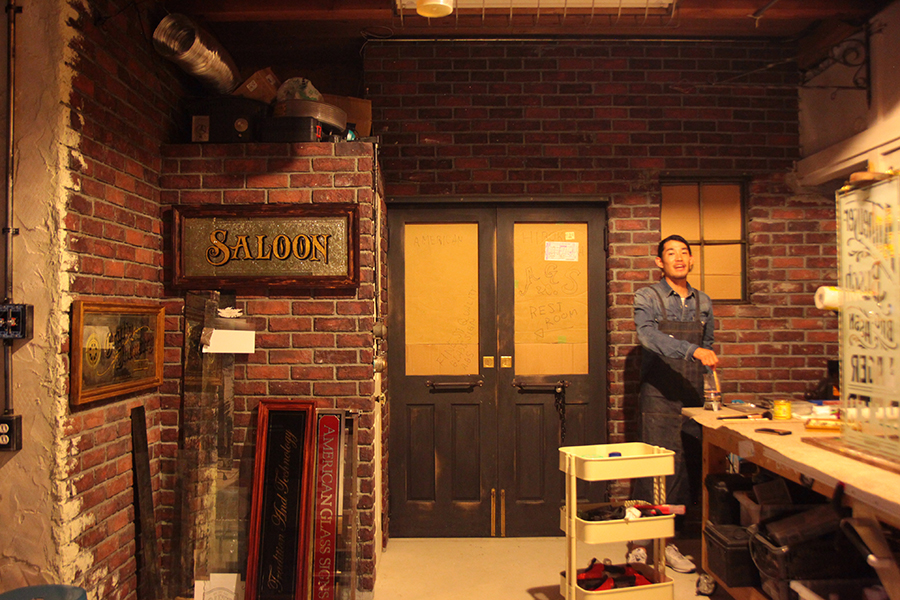 “At that time, I was thinking I good to throw away all. Anyway lived want to learn this technology. In the United States, I thought that going to work in the United States. The contents of the e-mail also, I sign paint made, technology that put a gold leaf also, why should learn your skills. I do want to do the glass sign. in like a content ”

“And then, not not you working in the United States, I me to spread the glass sign in Japan, Is not being said. Huge business opportunity, if not in Japan. So you is me me to work in Japan. You if there is a technical, because I is gonna to be able to the glass sign in two months, is persuaded. and several times by e-mail to such exchanges I, after six months from the first e-mail I had been over to the United States ”

And there was a “up to now experience, in the training of 10 hours a day, really came back to remember in two months. Also repeated many times on your own from there, to introduce to participate in Toka event, so work also enter by the Cho, I feel that there is now. ” 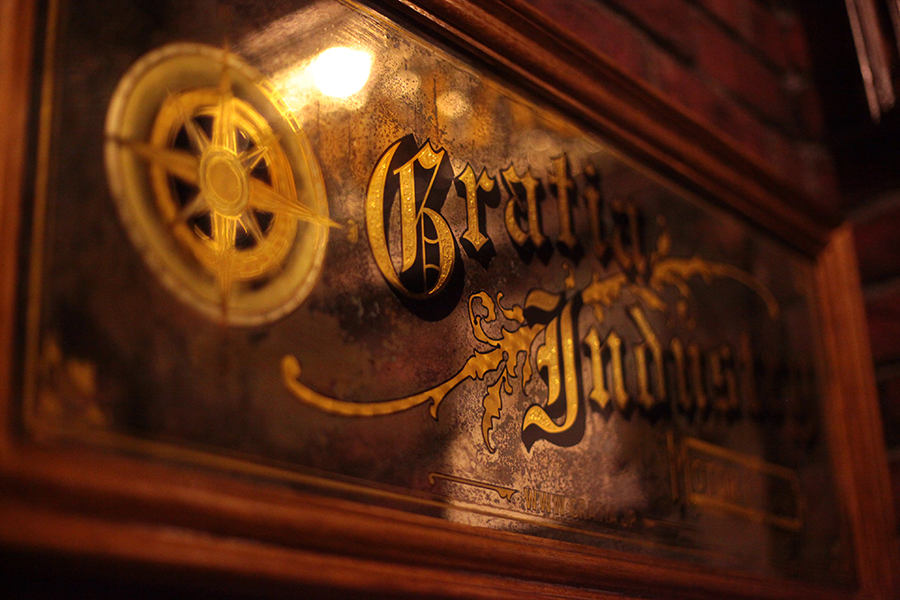 Life of Travellers’ over House

Kataoka is not a Machinaka, likely to have a production in the suburb of Ujitawara has also affected life in the United States.

I “teacher is I know are wondering low Derrick Treece, Toka work of Ralph Lauren, I’m a work of Toka hotel in Las Vegas. I of such teacher house I’m insanely large. Large Nante not’m mon, Nde California countryside, it’s certain about 500 square meters. but I have a traveler’s over House on the corner, I did you live two months ask them to use there. ” 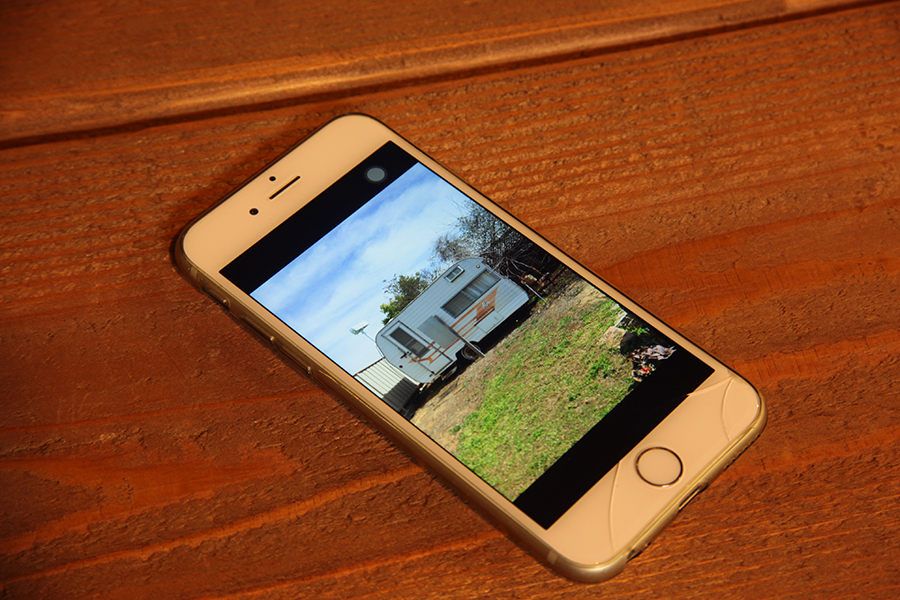 “I’m a big nature. Around the master of the house. At that time, but training is, of course, interesting also living in such a country, I now think on Do not, say I location of the nature. Ujita also we have a its influence had come to Haramachi ”

Challenge from adversity, that continue to chase a dream

Kataoka, who have honed the technology until now, that I want to spread the real brilliance of the glass sign also competed in the event in the future. Identify what you want to do your own up to this, there is a reason to have been come to continue.

“Teacher also, I I had a long time ago and a sign painter. In, been working as an artist in various places, I seem to have entered the world of glass sign in his later years. Continued much event participation if, now, I amazing in the United States but I’ve been told, so I also want to be so, I would like to now also out to Toka events, activities as an artist. ” 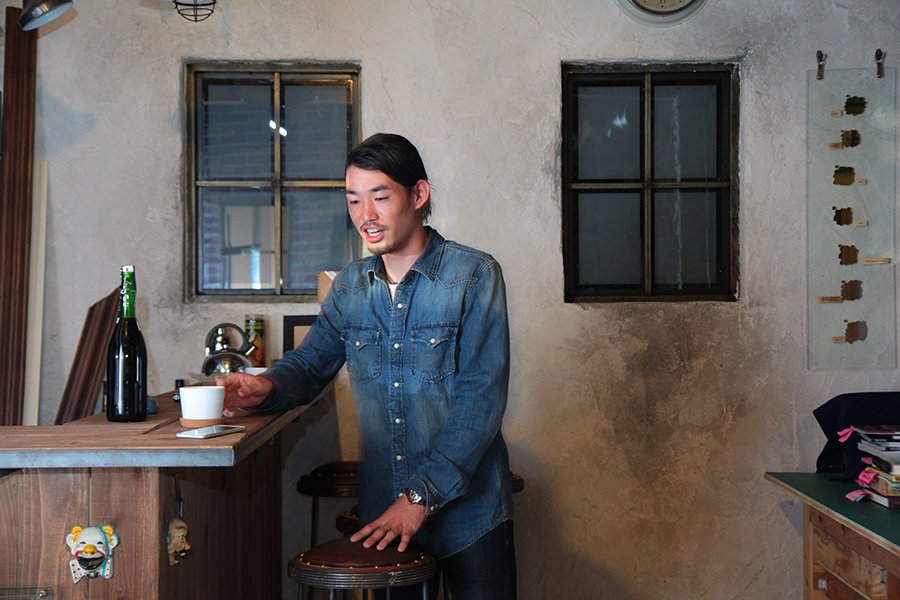 “Once upon a time, it’s there is what was said at the time to begin to sign paint. Not have to go to the school of the Tokyo National University of Fine Arts and Music Toka design, in the second half of the .10 generations but I went to increase to be able to gradually from street art, sign paint and, when it is on, but I happened to enter the coffee shop of the master was the person who had also studied abroad in in. America Tokyo National University of Fine Arts and Music graduation. if you did not study the basics out of the school, absolutely impossible, said on ‘m tan. quit were it is wooingly ”

” Absolutely Ya’ upcoming, I have preserved. You’ll know, feelings of that time it is (laughs) the feeling of that time do not forget now that after 10 years ”

“The teen people, I want to doing as an artist, I’m there to be told something like that. I present situation is do nothing of the skill, but still is better you have an absolute challenge, outright say on . I’m not a position that could say is I like a human being, I also to have become somehow, I it is the life of the one-time ”

“It ‘s not born into a wealthy family at all, but I do not even go to art school, facing seriously to dream, if the effort the road is open, and I think. It did that person is, it can not be because it’s not. ”

“The first is obvious and can not be anything, also is said to be impossible, and continue to challenge be a fool, I’m not little by little I Is’m Hikkurikaeseru adverse circumstances. It is so Sibi (laughs) ”

“I’m still a middle of a dream, I have to improve the thing and technologies that go to more and more big stage, get to thinking I” may I also could do. “To the people who run toward the people and dreams that aspiring artists a man to have wanted to be “as 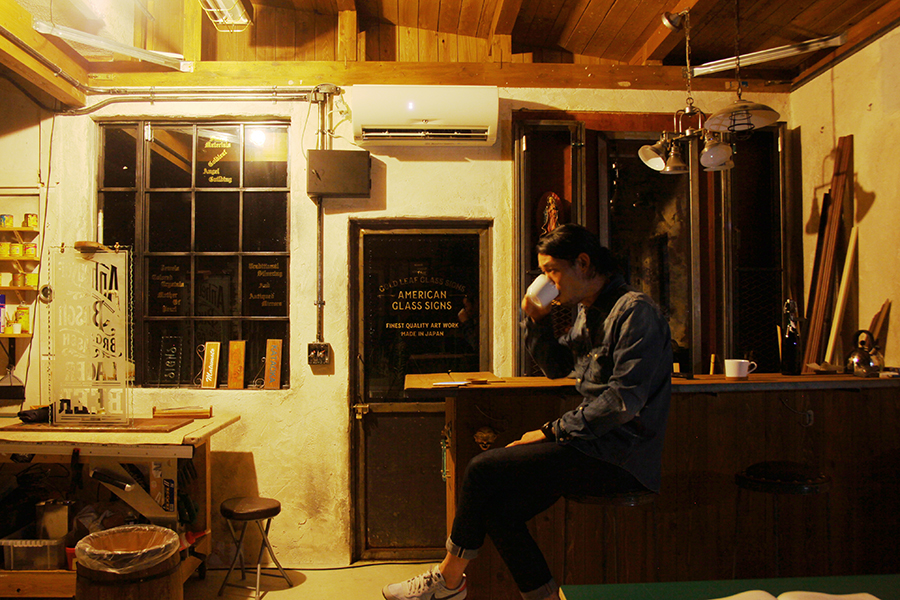 And the calm one side to look ahead to the future, Kataoka with a passionate one side straight rush without listening to anyone of opinion Once Omoita’. At first glance, but it seems the exact opposite of the character, Miseru sure Yaritoge in either in the underlying, is a strong feeling that was Ukagaemasu. Everywhere from now, it might be the opportunity increases to see his work.The streets, such as the scene of the old days of the Movie, become excited a little and think about the day of window shopping.


More from my site

Like the wind in the valley legend, silver grass is soon in full bloom of Soni plateau that fill the one side

Story should be repeated in the tavern: Drunk’s ballade sixth episode