Sake is not a boom, these days has spread to in life as a culture. In Italian as well as taverns, there is a place lined with premier brand and classic brand, has subsided iv bottle in the refrigerator at home. Underpinning the popularity gradually spread sake, or would not be a “Nishiki Yamada” to be useful to the country of the brewery as sake rice. It has a relatively large Kokoroshiro, since it can be expressed taste with depth can be high-polished rice, some people referred to as the king of brewing rice suitable. Such roots of “Nishiki Yamada” is likely but brewer’s rice called “Minoru Yamada” and “short 稈渡 ship”. Its two sake rice production which gave birth to a king, but he would cut off once, has made a revival in the past 10 years. It is to hit the father lineage Akihiro Sawa farmers revived “Shiga ferry No. 6” of the “Nishiki Yamada” this time, history and up to the resurrection, I asked the charm of the “ferry”.

Brewer’s rice, which was resurrected from the rice species of a handful (about 50 grams), “ferry” It does not remain only in the literature, of course, that touched even Sawa’s farmers, sake rice that it nor seen “ferry”. Farmers are producing is Orazu, first necessary to obtain the rice species in order to produce. The Sawa’s has visited, Shiga Prefecture Agricultural Experiment Station that manages the seeds of crops (currently through the Agricultural Experiment Station, Agricultural Technology Promotion Center). So unlikely rice species that entered the hand was only a handful (50 grams). Continue to expand little by little from there, and now has been expanded to provide to 13 companies brewer in the prefecture. I thought trying to make is, Serve from think of want to make the brewer’s rice Shiga Prefecture can be proud of. Prior to do “” Shiga ferry “, I I was making a” Nishiki Yamada “. But, that’s it I do not win in Hyogo Prefecture. So there is a need to make a sake rice Shiga Prefecture, it was Shiga , I thought that ” “” Shiga ferry “is that so was also made in Shiga Prefecture until 1959. I I had ceased production and Pata’ from there. However, when examined for” ferry “, varieties of” short 稈渡 ship ” I was found that corresponds to the father of the famous “Nishiki Yamada”. when you’ve found is I was happy. So, again, that Ya’ After the delicious sake should Ya make of this, it was decided to production. rice species is it was something that had been managed by the Shiga Prefecture agricultural Experiment Station. remaining had began production from only 50 grams. there. ”

I did not know at all whether it is what the United States. No longer know more and see can have rice

While it was Sawa who was skilled in the treatment of sake rice, I was surprised when that could “ferry” likely. That there is the difficulty of native species unique training.

I was surprised, “I’m a rice field has become pure white it in the fall.. Usually it, fall I’m golden brown is like a panicle of ears of wheat. Even” ferry “, it is like a long hair thorns I I have become Boubou. Once upon a time “Shishikuwazu” that I’m there is a breed, I. as I made the thorns Hen eaten by the beast, I’m the US thought was I think I got it made. But, because it is never seen such a do, and then sky surprised ” Was taken aback, “best is, it is the difference of the length of the culm. Same kind of I was able to those of Once different length seeded rice species. The length of the culm if” Nishiki Yamada “almost constant What is. but, “ferry” is also No. 4 some is No. 2 height of culm, there is also a No. 8 some No. 6. also high quite a culm that No. 21 but is not listed only in the literature rice I heard there. Furthermore say and late growing rice (which is a long period of time to mature) but I’m reap from over why October, probably would have been done in a typhoon. I was not feeling chilly. or with the look good to say when the Waseda it’s certain (mature ones short period) also. Honmani I do not know the reason. it had made a precious thing. and, I was also uneasy feeling. ”

Unique way of growth of native species unique is that difficult There is also interesting also. This is a testament to strong life force, there is a symbolic episode that shows it.

It is the time of the “Gold Rush, I’m apparently had been working many immigrants of Asian in California. Since the US is needed, I I was supposed to be trying to make even beyond. Asian countries, some I also from Japan I’m apparently sent the seeds also. But you know, I’m apparently did not grow. only “ferry” in that it is seems to grow good, I like a has also become a California rice roots ”

It is also time to “sake, I’m there to be in trouble. I also after bottling, I I’ve been fermented. I from the brewery’s, and was told on” does not become difficult wine “, and even if the bottling say lid flies from the fermentation death night. well listen, fermentation period is, if there longer of what short if any thing, I did it fall apart. I also was difficult adjustment of the fermentation ” 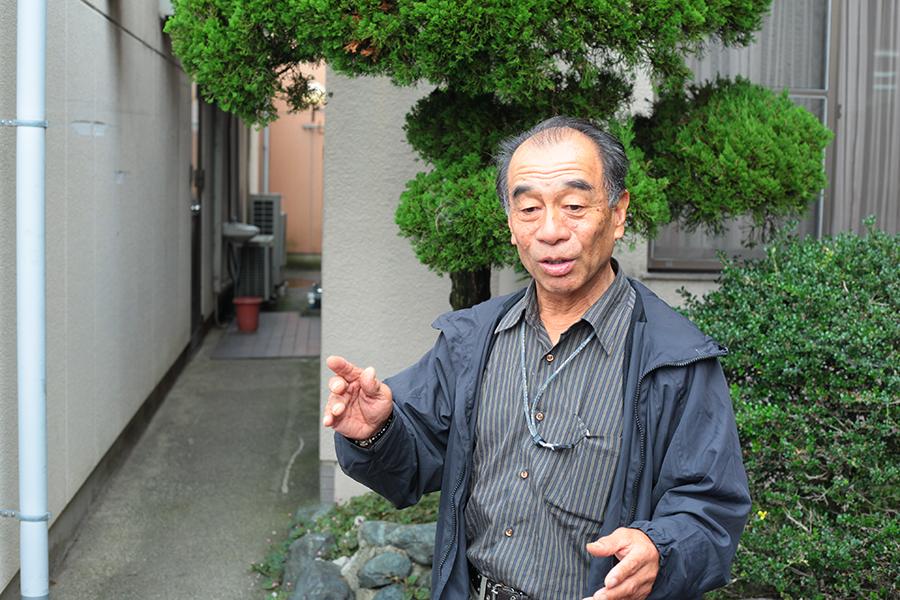 “But you know, it made many brewery’s show great me sympathy, Shiga Prefecture, 13 companies who have cooked the liquor in the” Shiga ferry “. Thankfully I mon. From now on go to expand more, Shiga I want to be called speaking of “ferry” and the prefecture. Nde there is an interesting native species of sake rice even after the Kansai region, I am happy and can do like a native species festival ”

A difficult sake rice breeding, but Sawa, who says it is interesting. If to be a stable supply, it might come a day when sake using the “ferry” in all brewery of Shiga Prefecture is made. To strong sake rice personality, from the liquor was made while struggling supposed to come out the wine cellar of the peculiar taste. While thinking of the birth of the future of sake, Sawa, who talks about the brewer’s rice “ferry” was very fun. To café-restaurant in the woods of autumn leaves at lunch I went to the “star of the swing” to enjoy “old clock of the old man.”